Guide to Planning a Bridal Shower 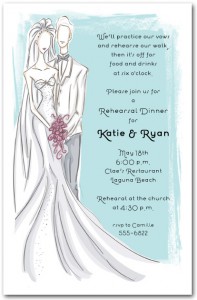 A bridal shower is one of those parties you can throw that will be fun and yet practical at the same time. While the purpose of the bridal shower is to give the bride things that can be used in her marriage, another fun reason is that it allows some hours away from the planning and stress of the wedding itself, for the bride and family to just play games and have some good clean fun.

The bridal shower is the perfect occasion to share funny family stories and for friends and relatives to gather to give the bride advice and support for her marriage. It is also another occasion which the bride gets to be the princess of the day, without having to deal with all of the stress of the wedding itself. It is a much more casual and comfortable event than the actual wedding or reception generally are.

In planning a bridal shower, it is generally the responsibility of the maid-of-honor and the bridesmaids. While it used to be considered poor etiquette for anyone else to host the bridal shower, today it is perfectly acceptable. However, it is vital in your planning that you take into account the bride’s wishes and don’t make any plans or games which could make her feel uncomfortable or angry. You should consult with the bride and ask what she would like for her shower. Generally, it is best not to have a surprise bridal shower unless it is far before the wedding and you think the bride would really appreciate one.

The bridal shower should be held between two to eight weeks prior to the wedding date. Only invited guests of the wedding itself should be invited to the bridal shower. The time of your bridal shower is up to you and the bride; however the standard tradition is generally in the early afternoon. Today some people hold their bridal showers at a spa or even on the beach for a BBQ and party; it just depends on the wishes of the bride and groom. 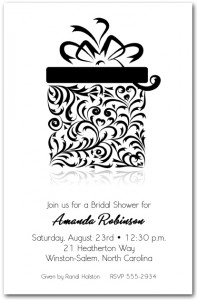 In addition, the other popular themes for a bridal shower are:  around-the-clock showers, lingerie showers, kitchen showers, and travel gift showers. For an around-the-clock shower, each guest is given a time of day and their gift should reflect that time when purchased. For a lingerie shower the bride is given lingerie to enjoy with her new husband after the wedding. A kitchen shower consists of all gifts being useful in the kitchen, and travel gifts are for when the couple travel together.

At the end of the bridal shower make sure that you have a small sentimental gift for each of the attendees. Your gift can be something to commemorate the day, or even something simple such as a bar of gourmet soap. It is always nice to send your guests back to their homes with something special, in addition to their wonderful memories of the day.

We have lots of invitations in various themes for bridal showers, just click to browse:

This entry was posted on Tuesday, August 24th, 2010 at 7:00 am and is filed under Bridal Invitations, Parties. You can follow any responses to this entry through the RSS 2.0 feed. You can skip to the end and leave a response. Pinging is currently not allowed.

9 Responses to “Guide to Planning a Bridal Shower”