GIF is Named Word of the Year

GIF? What is a GIF? The word GIF, and the computer science behind it, has been around since the 1980s, but unless you were some type of media job, the chances of you ever hearing it are probably pretty slim. GIF, whose name is an acronym coined in 1987 stands for “graphic interchange format.”

The GIF has gained popularity in the past few years and it is something between an emoticon and a video clip, and a GIF looks like a short, slightly grainy video file that plays over and over again.

“GIF celebrated a lexical milestone in 2012, gaining traction as a verb, not just a noun,” said said Katherine Martin, Head of the US Dictionaries Program at Oxford University Press USA. The verb form “GIFing” is used to create short clips like the one above of fireworks over Paris.

Tumblr has a huge amount of GIFs posted and shared between sites and GIFing is truly an art form on the Tumblr platform where seeing “moving” images is the norm. So when you see or are sent an image with the extension “.gif”, don’t be surprised to see it playing on your screen like a small video clip.

Did you take or have you planned a special kiss for your wedding photos? We love this one!

My husband and I had a friend that restored an old Rolls Royce and he drove us from our wedding to the reception (thanks Carl!) and if my husband would have seen this picture, he would have tried it. He did jump out in traffic at a stop light with a bottle of champagne and went to some of the wedding party cars behind us to give them a swig. 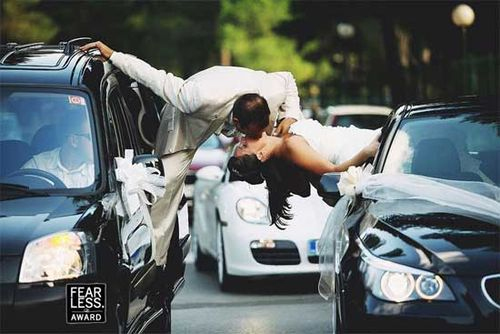