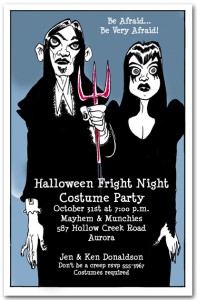 What will you be this Halloween?  If you’ve been invited to a Halloween Party or have decided to host your own, have you given any thought to your costumes?

Now that you’ve been inspired on how to dress, it’s time to order Halloween Party Invitations your guests will love!

This entry was posted on Thursday, September 16th, 2010 at 4:41 pm and is filed under Adult Invitations, General Info, Halloween, Holiday Invitations, Parties, Seasonal. You can follow any responses to this entry through the RSS 2.0 feed. You can skip to the end and leave a response. Pinging is currently not allowed.