What the heck does "RSVP" mean?

Those are just a few words that are printable describing people who do not respond to a party invitation's RSVP.

When talking to hosts, when trying to get invited guests to RSVP, you'd swear nobody knows what it means.

Technically, RSVP is an abbreviation of the French phrase "Répondez s'il vous plaît." Translated it simply means "reply, if you please". 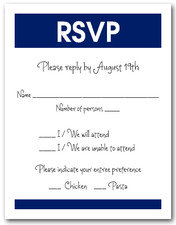 We get a kick out of what we call the "California Commitment Syndrome." It goes like this:

You say: "Hey, I'm having some folks over for dinner on Saturday, and I'd love for you to come."
They reply: "Great! Sounds good!"

You think you heard a "yes, we're coming," but really, you just heard enthusiasm and they are a no-show. 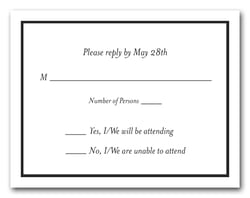 Today, people try their best to get people to respond to an invitation by:

• Including a RSVP card with a self-addressed, stamped envelope so all you have to do is fill in the blanks and put it in the mailbox.

• Invitation RSVP's contain phone numbers and/or email addresses to respond. If you really don't want to talk to someone, call their answering machine when they are at work or stick the invitation in your purse and reply by email the next day when you're browsing through your own emails. How long can it take?

• Respond by dates are included so a final head count can be given to the caterer, the bartender, the party favor maker...you get the picture.

• If you respond you're coming, show up! If an emergency comes up and you can't attend, please call so the host won't worry about why you're late. 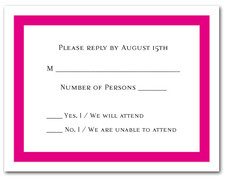 When you don't reply:

• "I thought they were good friends before, now I'm starting to resent them" is a common feeling of frustrated hosts.

• Children are especially disappointed when they don't know if their friends are coming to their birthday parties - parents, please call!

• Bridezillas are created by vast numbers of guests that fail to respond - hey, they've got enough to be worried about, you're not the highest priority on their list. Knowing they've spent their money wisely and chosen you among their friends to invite AND show up is important, so take a second and reply.

• Do know how hard it is to make a seating chart when you don't know who's coming?

• Someone has to take the time to call all the guests that haven't replied to see if they are coming or not because they've spent a lot of time and money on their special event.

• Hosts think "either I am extremely unpopular or people don’t have manners." What do you think?

• If you don’t respond to an invitation, know that the host will notice and remember (you know what they say about paybacks?)

• Each time you don’t RSVP, you fall further in the host’s estimation. Eventually, if not immediately, you fall off people’s guest lists.

• Decide when you will know if you can attend the event and mark that date on your calendar with a reminder to RSVP. Then call or email the host: “I’m delighted to receive your invitation, but I have some other obligations that don't allow me to commit right now. Can I let you know by such-and-such a date?” The host knows you got the invite, and why you haven’t replied yet. That way, he or she won’t worry that the reason you don’t want to commit is that you’re waiting for something better to come along.

• You think it will go unnoticed or it doesn't matter if you don't plan on attending. You're wrong. It is very much noticed by the host that you didn't respond "yes I"m attending" or "no I can't attend", especially when they are making up the expensive party favors and goodie bags. Hurt feelings are not soon forgotten.

• Put yourself in the shoes of the hosts and imagine it was your event and no one cared enough to reply to you...hurts, huh? 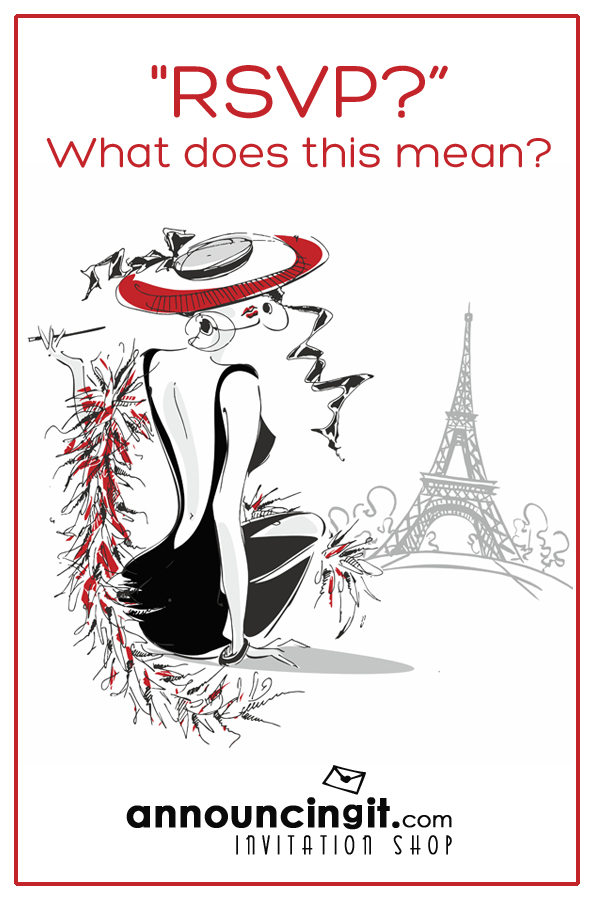 So, the next time you get an invitation...

JUST pick up the phone...

JUST email you're coming or not...

And everyone will be better off for it!

12 Things RSVP does not Mean

8 Lame Excuses for not RSVP'ing to an Invitation

What to include on Invitations