When and Where do you use Apostrophes?

When and where to use apostrophes is the most asked question when wording invitations or on return address labels.

DO NOT use an apostrophe on your return address!

This the number one mistake made on invitations (See rule 1 below).  On a return address is using an apostrophe on a last name:

So, the proper grammar for your return address is "The Smiths" or "The Smiths invite you ..." as you are using the plural form of the name = Smiths, not possessive form (Smith's or Smiths'), so no apostrophe, please! 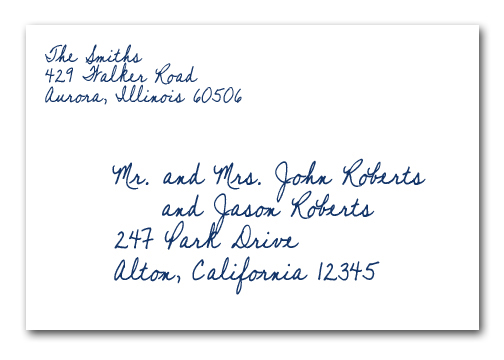 DO NOT use an apostrophe to sign your names!

When signing your Christmas cards or thank you notes with your names:

"Happy Holidays from the Smiths"

there is no apostrophe as you mean "plural" as the message is from all the people of the Smith family.

Grammar Rules and the Use of Apostrophes:

Rule 1.  Do not use an apostrophe for the plural of a name.

Examples:  We visited the Sanchezes in Los Angeles.

We visited the Sanchezes in Los Angeles.

Rule 2.  To show plural possession, make the noun plural first. Then immediately use the apostrophe.

NOTE: Although names ending in s or an s sound are not required to have the second s added in possessive form, it is preferred.

Rule 4.  Use the apostrophe where the noun that should follow is implied.

Example:  This was his father's, not his, jacket.

Rule 5.  Use the apostrophe with contractions. The apostrophe is always placed at the spot
where the letter(s) has been removed.

Rule 6.  With a singular compound noun, show possession with 's at the end of the word.

Rule 7.  If the compound noun is plural, form the plural first and then use the apostrophe.

Rule 8.  Use the apostrophe and s after the second name only if two people possess the same item.

Cesar's and Maribel's job contracts will be renewed next year. (Separate ownership.)

Cesar and Maribel's job contracts will be renewed next year.
(Joint ownership of more than one contract.)

Rule 9.  Never use an apostrophe with possessive pronouns (show that something belongs to someone):
his, hers, its, theirs, ours, yours, my, whose. They already show possession so they do not require an apostrophe.

Examples:  The white house is theirs.

The dog lost its toy.

Rule 10. The only time an apostrophe is used for it's is when it is a contraction for it is or it has.

Examples:  It's a nice day.

It's your right to refuse the invitation.

It's been great getting to know you.

Rule 11. The plurals for capital letters and numbers used as nouns are not formed with apostrophes.

Examples:  She consulted with three M.D.s.
BUT
She went to three M.D.s' offices.
(The apostrophe is needed here to show plural possessive.)

She learned her ABCs.

She learned her times tables for 6s and 7s.

Exception:   Use apostrophes with capital letters and numbers when the meaning would be unclear otherwise.

Ted couldn't distinguish between her 6's and 0's. (You don't mean Os.)

Rule 12. Use the possessive case in front of a gerund (-ing word).

Examples:  Alex's skating was a joy to behold.

This does not stop Joan's inspecting of our facilities next Thursday.

Rule 13. If the gerund has a pronoun in front of it, use the possessive form of that pronoun.

Examples:  I appreciate your inviting me to dinner.

I appreciated his working with me to resolve the conflict. 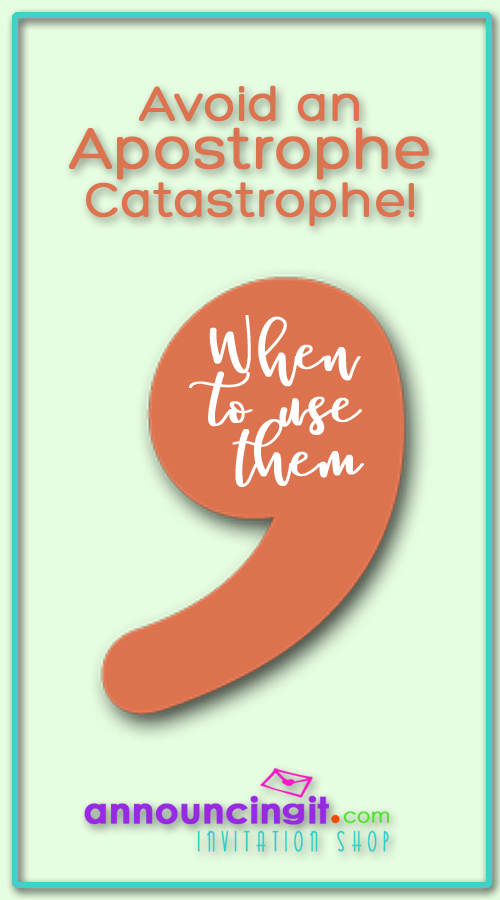 What to include on your invitations

Dress Codes and How to Dress for Events

When to Mail Party Invitations